Goetta is a Cincinnati staple.  An old-style German food from days past made of a mix of ground pork, ground beef, and pinhead or steel-cut oats.  It reminds me a bit of the Pennsylvania Dutch scrapple I grew up on, in that it is quite tasty but also a bit of an acquired taste. 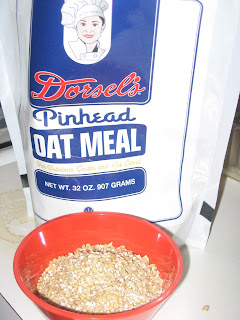 After years of living in Cincinnati, I decided on a whim last week to try to make my own.  I started by looking up a slow-cooker recipe, picking Sarge's Slow Cooker Goetta.
Since there is one of me, I dutifully halved the recipe.  I should have thought through the quantities a bit more though, as I still ended up with a great deal more goetta than I had anticipated. Two loaf pans full!

Silly me for thinking he was talking about a normal sized slow cooker. Good thing I like goetta. 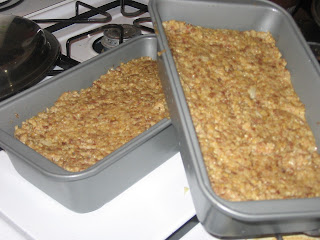 After letting it all cool, I sliced most of it up into slices and froze it for later use.


Like tonight for a tasty midnight snack of goetta fried up with eggs. 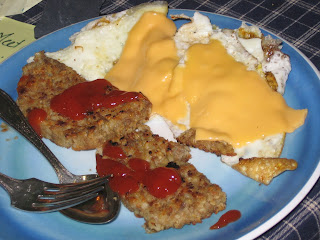 P.S. You really don't need the ketchup. That is just my Pennsylvania Dutch roots showing.  I will have to pay attention at the diner next time I go what fellow Cincinnatians put on their goetta.
Posted by Vanilla Bean at 9:45 PM No comments: