It was a full moon on Tuesday and the local national park had a full moon walk.  I have been wanting to go and would always forget or have a conflict, but being June, sunsets are late and the hike wasn't till 9 o'clock.  However, I opted to go anyway and was rewarded with the sounds of a great horned owl hooting, the sight of the space station speeding across the night sky, my first spottings of this years lightning bugs, choruses of peepers and try frogs, and a bright moon on the horizon lighting up the night.

June's full moon is known as the Strawberry Moon or the Rose Moon and I left the hike anxious to find some strawberries to make a pie.  So Saturday morning after running a 5K, I watched the roadside for signs of strawberries for sale.  I spotted a couple of Amish boys sitting at the end of a drive with strawberries in their buggy.  I was going to buy two quarts but he didn't have enough change, so I bought 4 quarts and called my mother, who was glad to take some fresh strawberries.  I already had plans to make rhubarb compote with the Colonel Mustard, so I opted to make the strawberry pie while the compote cooked down. 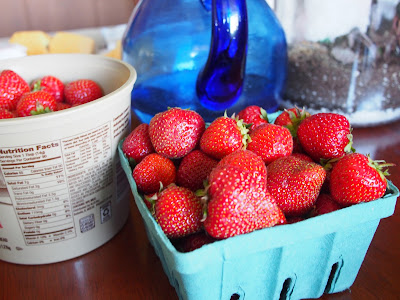 As I waited for the pie crust to cool, I tantalized my family with talk of the coming pie and left everyone eagerly waiting.  Unfortunately, for everyone, I opted to take a picture of the pie on the porch before putting it in the fridge to cool, when the swinging of the screen door hit my arm and sent the pie flying.  All that was left in the pan was a jumble of strawberries and broken crust that may have consisted of about a fourth of the pie.....  Needless, to say the family was disappointed.  Mom helped me dish it into bowls and top it with ice cream, but as the Colonel said, "In this case, more is better," ..... and there were no seconds.  Don't worry, mom made a fresh strawberry pie on Sunday evening.

Who Wants Some Figgy Pudding!!


Happy New Year everyone!  I had a blast cooking yesterday after work to get some culinary delights ready for the New Year's Party I was going to, however that will have to wait, as I am jumping back to Christmas Day, but just know I felt like I was bringing in the new year right having so much fun in the kitchen - I will tell you I made wings, fondue, fresh bread, and started some sweet potato nachos all between 5:30 - 8 pm.

Well now back to Christmas Day.  This year I was given the task of making figgy pudding.  We had made this for Christmas another year and I remembered the flaming fig mixture as it burned off the alcohol and truly I was filled with a little trepidation.  I also remember liking it when we made it but in conversation and/or reading I had heard accounts of people trying figgy pudding because of the echoes of "bring us some figgy pudding" from the popular Christmas carol and being disappointed because it "really wasn't all that good".  So as Christmas approached and I was searching for a recipe, I wasn't as excited as I usually was.  One may ask why I was looking for a recipe, when I already had one that we knew we enjoyed, but truthfully, I find that the hunt for the recipe is sometimes almost as fun as the cooking and the eating....something like a perusing a seed catalog in the middle of the winter.  Another reason for a new recipe was Vanilla Bean's diet modifications - the big one in this recipe was - no eggs.  So I searched for eggless figgy pudding and wouldn't you know it, I found one, and boy was it good.  All that trepidation and nervousness disappointed and the joy of the task took over as I prepared to modify the recipe even more, substituting rum for coffee and apple juice for orange juice, some because of Vanilla Bean and some just because, well, I'm me, and if you ask my friends, me and following a recipe exactly just doesn't seem to happen all that often.

And in the end, we had delicious figgy pudding and I had lots of fun.

In other Christmas day culinary delights.

Colonel Mustard enjoying the events of the day.