Gyoza (or jiaozi)  are a type of Japanese pan fried dumplings or pot stickers that are first fried then steamed.  I stumbled across these when I was looking for something to make that would feel like I was back in college eating eating Chinese takeout or Japanese food with D or the girls from the Threshold. They definitely hit the spotn, but these are not what I would call  simple to make.  In fact they are rather time consuming and require a multi-step process. They are oh so tasty though, lingering in the mind days or even months after the last one has disappeared, until the next batch comes around.  A very good reason to make a large batch and stick some in the freezer for a special treat on later days.  Making with a group of friends could also make it a bit more fun.

The first step is to make the wrappers 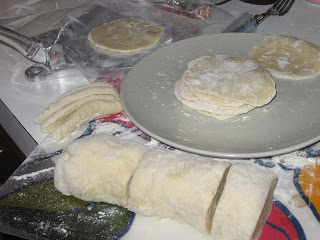 Make the dough. Roll into logs. Chop up the logs into sections, and flatten each piece into a nice little gyoza wrapper.  La Fuji Mama blog (lafujimama.com) has a great tutorial for how to make these.  The only change I would recommend is to use a tortilla press if you have one, especially if you have any tendency toward arthritis or tendonitis in your hands or arms.  Much easier, and much faster.  The first time I made these, I rolled them out by hand, and it seemed to take FOREVER.  The second time I used the tortilla press and it was a much less tedious job.  Wrap them up in saran wrap and stick them in the fridge for gyoza stuffing another day.

Or you can skip this part altogether and head for the grocery store and a nice package of won-ton wrappers that have already been nicely prepared for you.

The second step is the stuffing of the gyoza.  I'll give you my recipe version here, but I'd recommend looking up another recipe elsewhere online for the filling (such as the one at steamykitchen.com) as with all my food sensitivities and the need to leave out "all the good stuff", the result is most likely a rather bland version of the real thing. There are also some really great step by step guides to see what each and every step should look like.

Mix everything together until well blend.

Once the filling is ready, take out your gyoza wrappers and set up for the next time consuming part-- filling and folding all the little  individual dumplings.  It is best to take out just a few of the wrappers a time and leave the rest wrapped in the plastic wrap so they don't dry out.

Take a wrapper and carefully spoon a small amount of the filling into the wrapper.  Swipe the rim of the wrapper with  water, fold the top half of the wrapper over the filling, and then carefully begin pleating the wrapper in toward the center from both sides, pressing down to seal the dumpling.  I'm still working on mastering this, but there is something very restful and meditative about the repetitiveness of this step(for the first half of the batch anyway, then you just want to be done.) Set aside on a tray, and move on to the next one.  Once they are stuffed, you can either cook them up straight away or stick the pan in the freezer to allow them to freeze. Once they are frozen, dump into a container or a ziploc bag in the freezer. 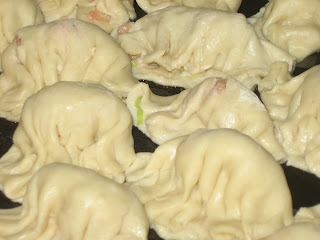 To cook them up, put oil in a frying pan and carefully place the stuffed gyoza in the pan and fry until they have a crispy crust on the bottom.  In the pan like this with their pleated edges and stuffed round tops, they make me think of a cloud of little jelly fish drifting along in the current.
As you can see from the photo if you compare my gyoza folding with the "real" thing, I have a ways to go in perfecting my technique, but  funny looking or not, it doesn't seem to hurt the taste any!

Then comes the steaming. Throw in a 1/2 cup of water and cover the pan with a lid (I usually use the lid from my stock pot). Allow them to steam until most of the water has boiled off. Maybe 5 minutes at the most?  By this point they should be nicely steamed and, more importantly, cooked through.

Scoop up a few and eat with your favorite dipping sauce.  Many seem to be some version of soy sauce and vinegar and oil.  So far I have mostly gone the lazy route and just eaten with my speedy version of foy (fake soy) sauce, a mix of vinegar, molasses, salt, garlic, and, occasionally, plum jam. 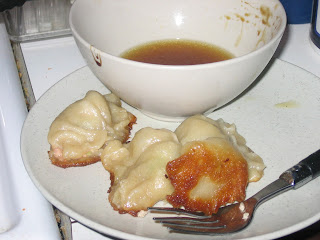 Posted by Vanilla Bean at 4:59 PM No comments: