A few weekends ago, the three of us were able to spend a "siblings weekend" together  at a local state park where one of us (read Tinbugs) was participating in a mini triathlon for breast cancer research, part of the girls tri too series.  We had a great time, and even had time to do a little bit of cooking.

We started out the weekend by seeing a beautiful sunset out across the lake, and ended with a breakfast pizza as we rushed to get out of the cabin and back on the road by checkout time. In between we hiked (a smidge), waded in the water...ignoring the pigeons, plotted the opening scene of our future Murder Mystery Supper, checked out a garage sale, ate ice cream and fried cheese at Young's Dairy, painted, watched movies on cable tv, painted water lilies, alliums (purple puff ball flowers), and Lake Atitlan, cheered on Tinbugs, and in between had a lot of good conversation. 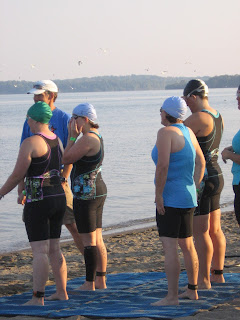 Waiting on the beach... almost time. 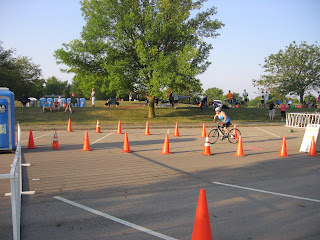 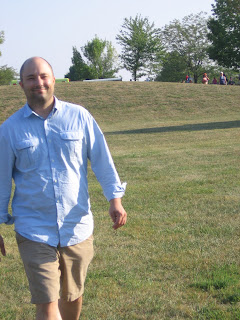 A proud member of the Tinbugs Fan Club walking to get a better view of the running section of the race. 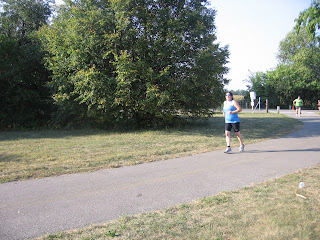 Almost to the finish line... just a quarter mile to go.


Booyah!!! That race was so rocked. 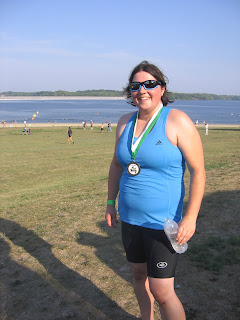 And, since I probably should say something about cooking, our "big" recipe of the weekend? An Autumn Tart from a Polish blog we stumbled across on FoodGawker. 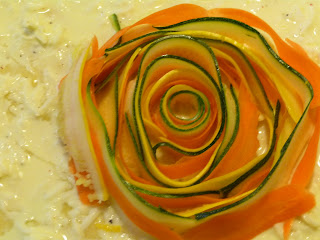 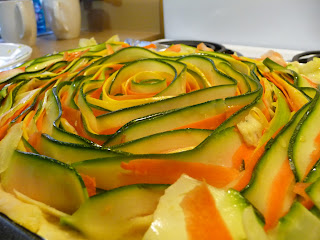 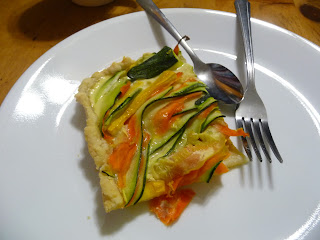 If you are looking for something light and beautiful, and have a bit of time on your hands, consider making this tart. It was very good and beautiful, but took a bit of time to slice all the veggies. Maybe because we used a peeler to get the thin slices?  In our version we exchanged the eggplant for summer squash and baked it in a rectangular roasting drip pan, as that was what we could find in the cabin cupboard.

Posted by Vanilla Bean at 9:56 PM No comments:

Tomato time! Late summer always brings so many memories of previous harvests with all the vegetables popping with flavor and produce waiting in pecks and bushels and crates to be frozen and canned.  Mostly I remember coming home from school to tomatoes on the stove top, steaming and simmering their way into the tomato sauce we would enjoy the rest of the year, or sitting down at Grandma Weaver's dinner table to a bowl of her canned cherries or peaches.  Summer flavors stretched round to all the rest of the year.

This year Mom was nice enough to show me the process of canning with a water bath.  We kicked off our weekend of canning by making ketchup.  When I told my Grandma that Mom and I were thinking of making ketchup and tomato sauce this weekend, she told me about the old days of simmering and canning.  When they used to make ketchup, she and her sisters would build a wood fire in the wash house and spend all day stirring the tomatoes in a big copper kettle hung over the fire as they slowly boiled down into ketchup. Her verdict on that ketchup? "Oh, that ketchup was sooo good."  After hearing about all that hard work, flipping the switch on the crock pot for my own ketchup's twelve hours of simmering felt completely decadent and lazy.

For this ketchup we looked up several different recipes online then went with a simpler combination version of those.  On the cinnamon, you may want to add a bit more than we did, depending on the type of cinnamon you are using. We ground up a few small pieces of Penzey's Cassia Chunks Cinnamon, which is quite potent, and we didn't need to use very much at all. 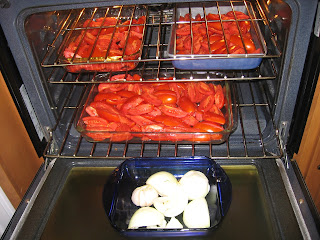 Place the tomatoes and onions in (un-reactive) pans and roast at 400 degrees for 20 to 30 minutes.

Pour the tomatoes into a colander to drain off the extra liquid (we ended up with about 3 cups of liquid).  Then run the tomatoes, onions and garlic through the food processor to puree them. 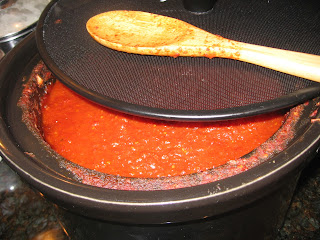 Once the veggies have been pureed, mix them into the crock pot with

Cover, and simmer on high for 1 hour. After 1 hour, remove the lid and cover with a splatter guard.  After another 1-2 hours, turn down to low and simmer for another 8-12 hours.

Using the splatter guard allows the excess water to boil off.

Once the ketchup is the desired consistency and taste, transfer the ketchup to glass jars for processing.  Here is a half pint jar of our new tasty ketchup waiting for its turn in the hot water bath. 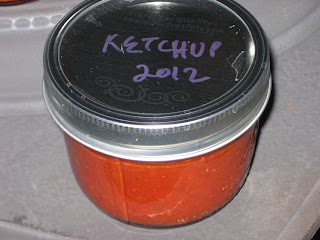 My verdict on our ketchup? Yum.

Addendum: Having now used the ketchup for a few weeks, I am not as certain about the recipe as I was initially.  I tend to be someone who adds ketchup to many different foods, and this is not a ketchup you can use as liberally as Heinz 57. The flavor profile for the bottle I am using seems to keep changing, and not necessarily in a positive direction. The vinegar taste is becoming a little stronger, and the garlic flavor is now a bit weaker, as is the overall seasoning.   Will need to do some tweaks next time I make this.  Perhaps more garlic, a few more spices, maybe use a different type of cinnamon... Will add more notes once I work my way into a second bottle.
Posted by Vanilla Bean at 12:11 PM No comments: