The Colonel called me up today and wanted to spend some time in the kitchen and it just happened I had gotten my Penzy's catalog and was interested in trying a recipe that was in the latest issue, so I readily agreed.  We got a later start though because I wanted to get a bike ride in today since it 60 degrees, spoiling me for the cold weather that will all to quickly return - but oh so grateful for the nice weather to have come on a weekend. 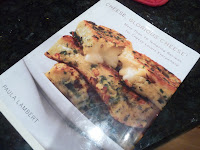 The Colonel is a big fan of cheese and for Christmas I had found a cookbook that basically had his name written on it - "Cheese Glorious Cheese."  He had set his sights on making something called Lemon Blueberry Dream - for me most anything with blueberries in it is a dream, my beloved blueberries, so of course it took no convincing words with this chose of recipes. 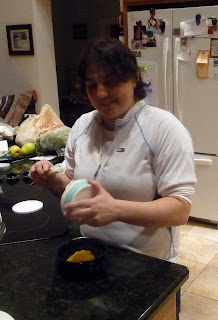 Layer curd and then blueberries with
liquid in dishes as a parfait.

I had a few different options for an accompaniment to the dreams, but as soon as the Colonel saw the Pineapple Rasam recipe in the Penzy's catalog there was no was no more discussion, that was what we were making.  I had showed the recipe to a couple of other people and they thought a little too interesting, but the Colonel came through, and we were delighted by the outcome, even my dad asked if there was some left for dinner tomorrow.

1/4 tsp mustard seed (+) (it was Colonel Mustard adding that so of course he was very generous, but he actually use a special mustard with whole mustard seeds that he got for Christmas from Vanilla Bean)
2 tsp butter
2 tsp cumin seed 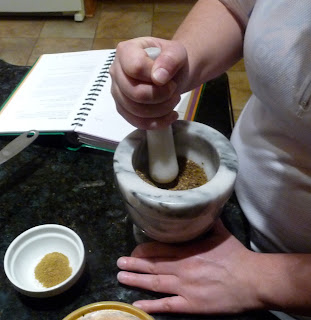 Heat peppercorns 1 minute in microwave (also 1 tsp cumin seed with this but we used ground) and then grind.  Puree pineapple in blender.  Set aside.  Heat butter in skillet, add mustard seed when hot.  Cook till crackling and popping, add rest of spices, including whole chilies and sauté for 1 minute.  Add pineapple and water, stir over medium heat then add salt and brown sugar.  Increase heat and cook 3 minutes.  Serve with chopped cilantro.


And what Indian inspired dish is complete without some naan bread.  Added extra prep time to our meal but oh so worth it. 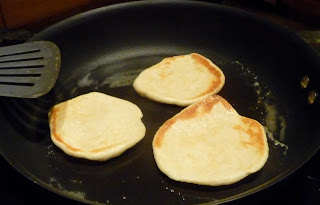 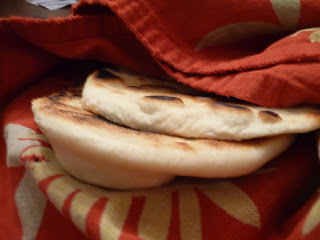 We had on unsuspected visitor to our evening and much to my mother's dismay that was sort of true bug.  It seems they overwinter as adults and the warm weather this weekend had them active, unsure how they got in the house, but we found three of them this evening, two are dead and one is in a jar as Tinbugs tries to identify it.  So far the most likely candidate is the tarnished plant bug.